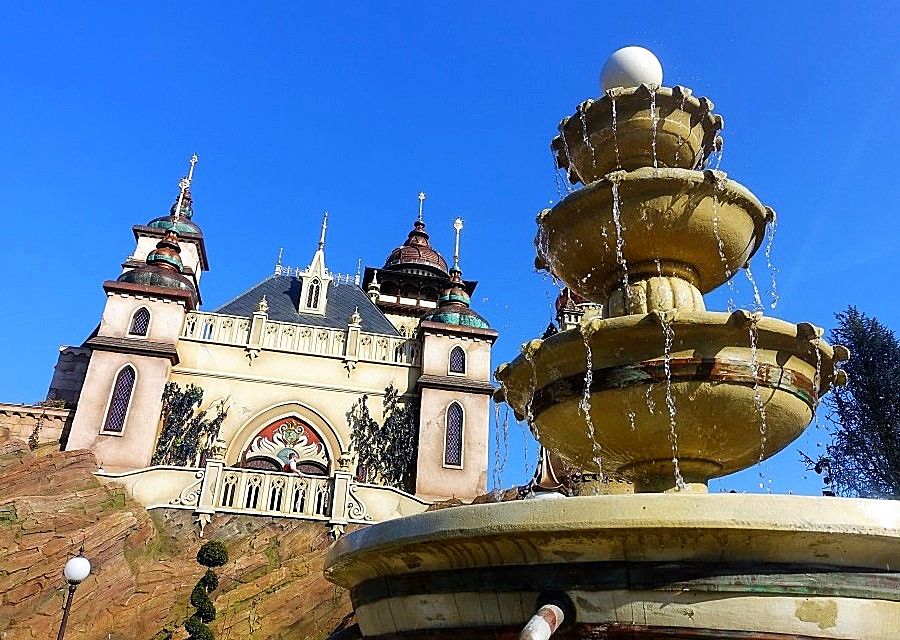 Efteling is the most visited amusement park in the Netherlands. Everyone in Holland knows the famous Fairytale Forest. Everywhere in the Efteling there is something to experience, for young and old. 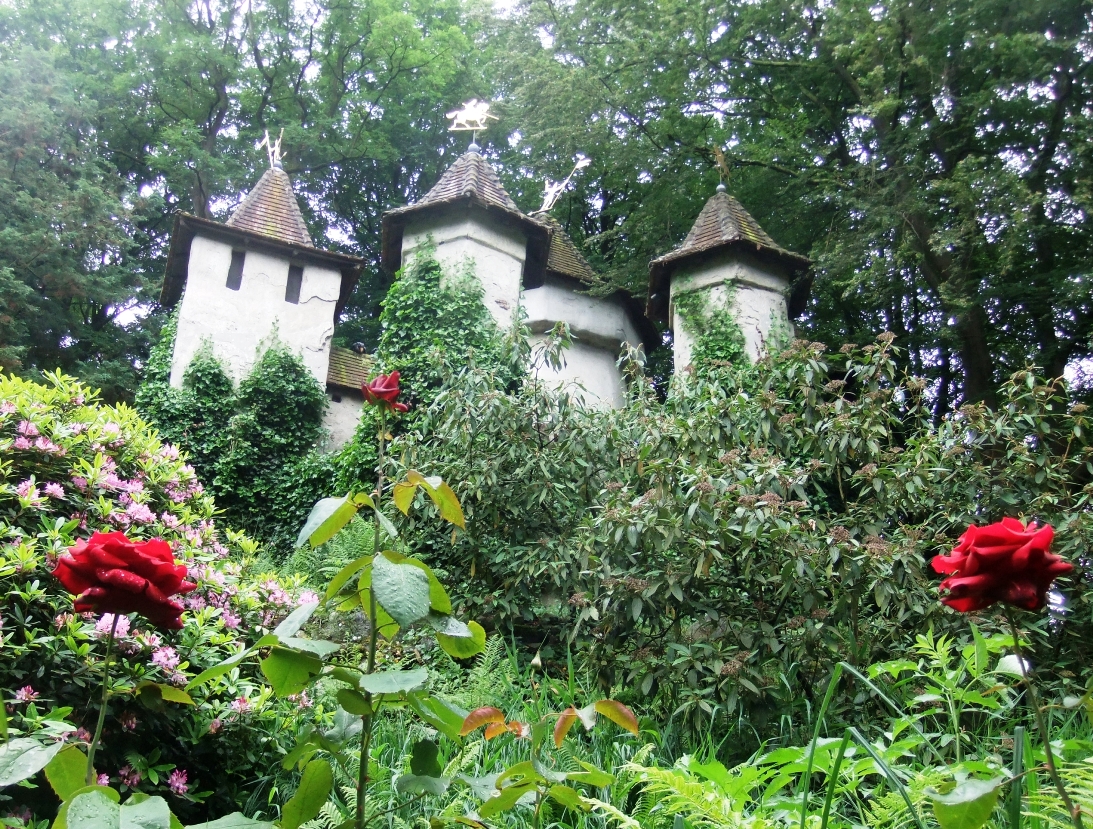 The Fairytale Forest of Efteling houses thirty nostalgic fairytale scenes, with well-known fairytales such as Little Red Riding Hood, Snow White, The Little Mermaid and Hansel and Gretel, as well as lesser-known tales such as The Magic Clock, The Chinese Nightingale and The Six Servants, with Efteling-icon Langnek in the main role. The latest additions are Pinocchio, the wooden puppet who wants to be a real boy, and the Grimm-fairytale The Six Swans. The park also has self-written fairytales, such as the Fakir, flying back and forth between the towers of its Eastern palace to keep the tulips in bloom, and the history of the funny Laven-people told in the Lavenlaar. 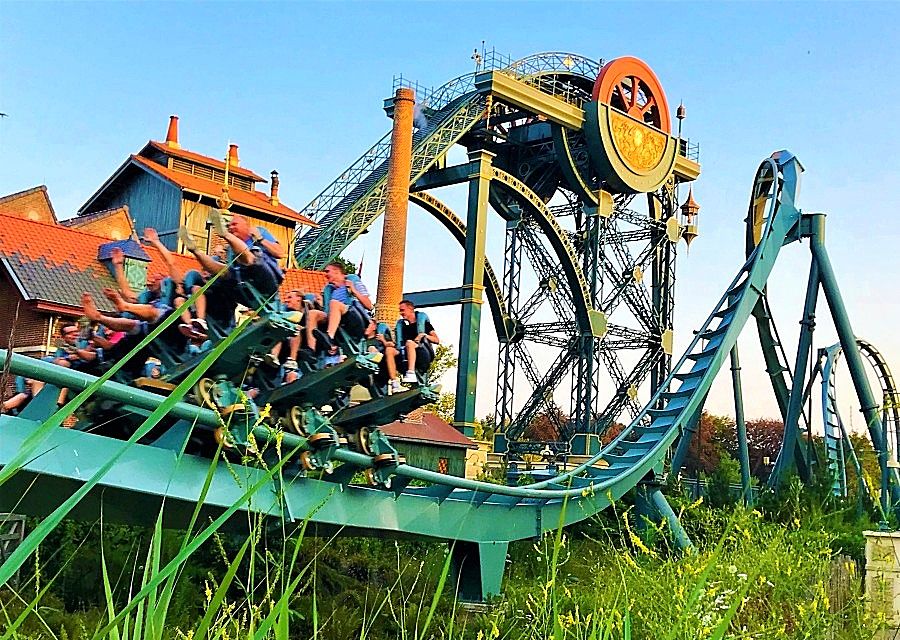 The fame of Efteling started with the Fairytale Forest, but the amusement park now has dozens of attractions in a wooded, park-like environment. Many attractions can compete with the best in the world, such as the majestic Symbolica, the magical Dream Flight and the mysterious Fata Morgana. The park also houses numerous faster attractions, of which Python, The Flying Dutchman, Joris and the Dragon and Baron 1898 are the best known. All attractions are spread over five themed areas: Fantasierijk, Marerijk, Reizenrijk, Ruigrijk and Anderrijk. 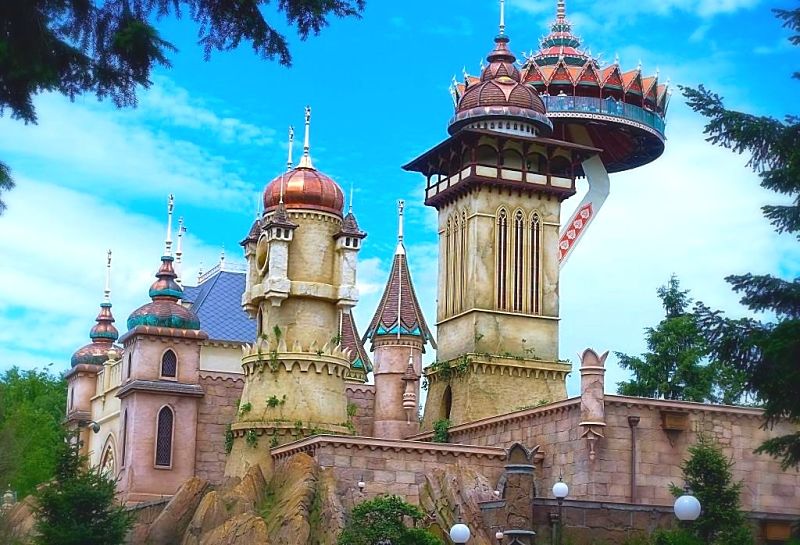 From the striking, thatched-roofed entrance building The House of the Five Senses, visitors walk along the Pardoes Promenade to the heart of the Fantasierijk (Fantasy Empire). Right in the middle of the park is the attraction Symbolica, Palace of Fantasy on the Hartenhof-square. In this impressive darkride, visitors have an audience with King Pardulfus. Footman O.J. Punctuel welcomes the guests to the palace. Then park mascot Pardoes takes them on one of the three tours: the Hero Tour, the Music Tour or the Treasure Tour. In front of the palace two roads lead you further into the park: if you turn left, you walk to Marerijk and Reizenrijk, the path to the right runs towards Anderrijk and Ruigrijk. 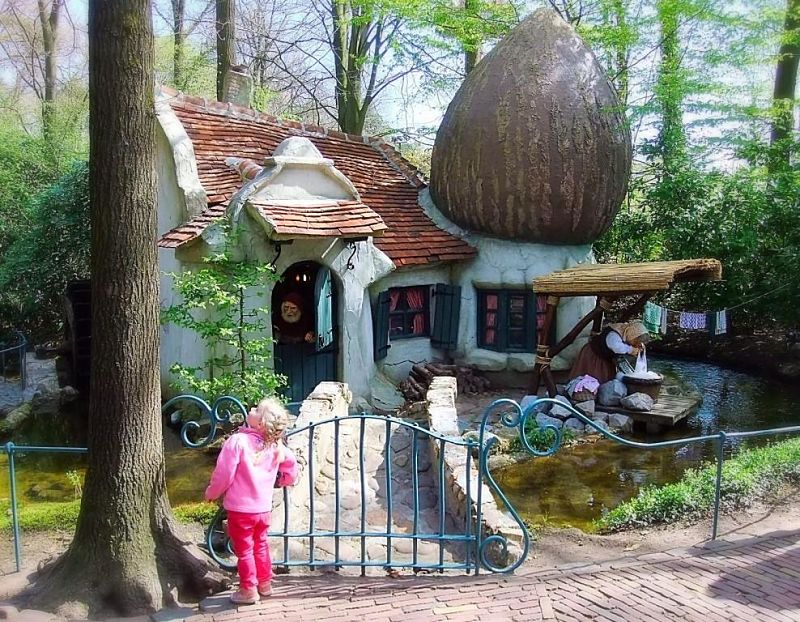 In Marerijk is the vast Fairytale Forest and Dream Flight, which is the public’s favourite. In Lavenlaar the Laven live in strip-like houses and in the mysterious house Villa Volta the world is turned upside down. The Marerijk is the origin of Efteling; the park’s own museum gives a good impression of the history and development. 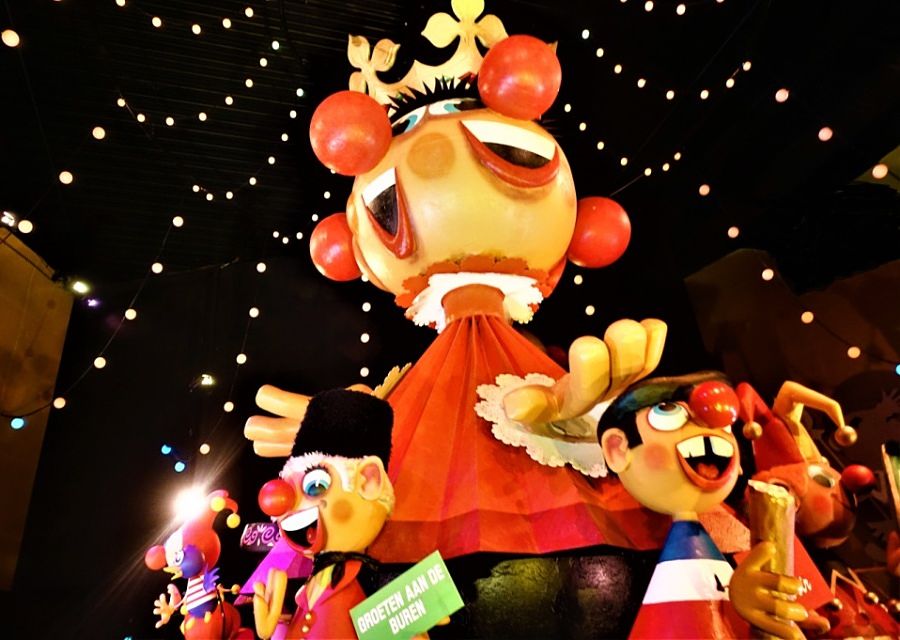 Reizenrijk takes visitors on a journey through the fast-paced world of Vogel Rok (from the Sinbad the Sailor fairytale) and along cheerful countries in Carnaval Festival. Children cannot get enough of this darkride with the addictive tune, just as Sirocco, playground Archipel and the colourful Kleuterhof playground are popular with the little ones. 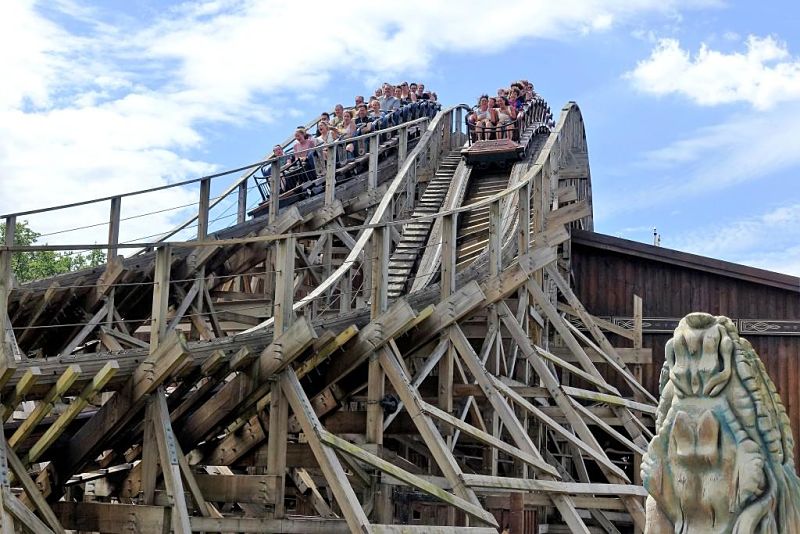 Ruigrijk is for the daring, with the good old Python looping roller coaster, water darkride and roller coaster De Vliegende Hollander (The Flying Dutchman), dive coaster Baron 1898 and swinging ship De Halve Maen. The double wooden roller coaster Joris en de Draak (Joris and the Dragon) has a height of 25 meters and reaches a maximum speed of 75 kilometre per hour. The two trains Vuur (Fire) and Water compete against each other for the fastest time. 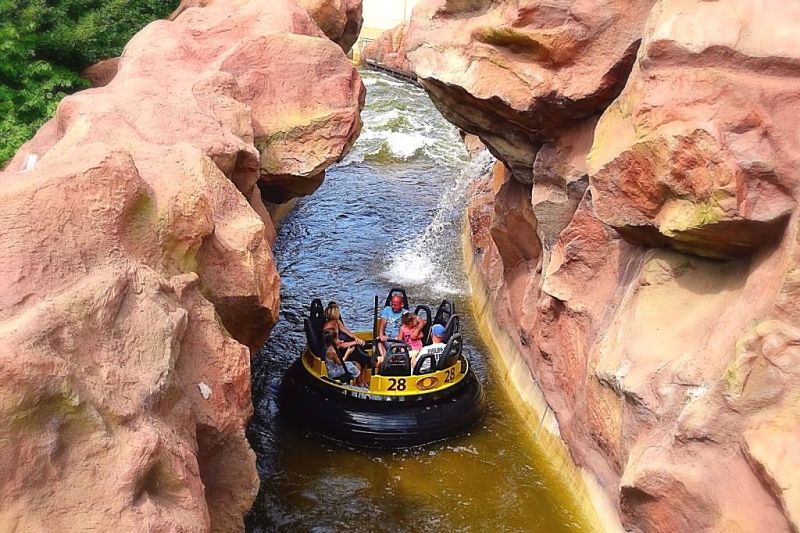 The most striking attraction in Anderrijk is the Piraña; those who do not want to make a trip (with the risk of getting wet) can watch the boats with exuberant passengers (and even try to spray them) at various places along the banks of this rapid river. The boat trip through the world of 1001 nights in Fata Morgana is one of the highlights of Efteling. Max & Moritz is a ‘powered coaster’, an electrically powered roller coaster that goes neither high nor too fast, making this attraction suitable for children as well. In Anderrijk are also 4D movie Fabula and the haunted mansion Spookslot. 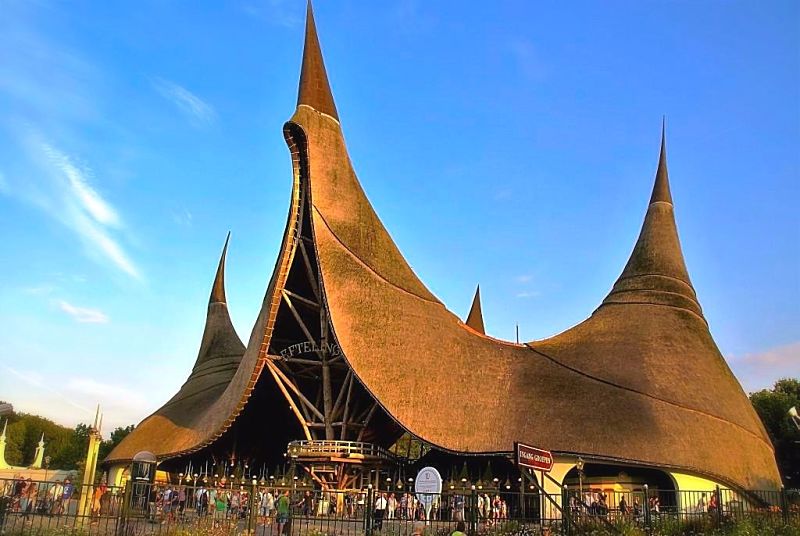 Immediately behind the park entrance is the large Efteling Theater where events are held and musicals are performed. The theatre has its own restaurant, Pinocchio’s Restaurant, also accessible to visitors of the theme park. From mid-November to the end of January the park changes into the very popular Winter Efteling. 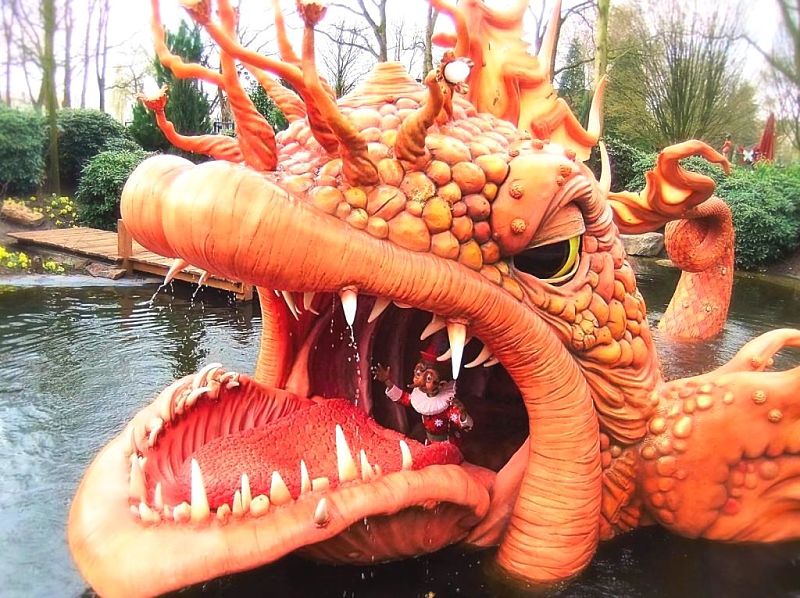 Shows: Aquanura (immense fountain show on the pond between the park entrance and Fata Morgana) – Fairytale tree, Once upon a time … (in Sprookjesbos Theater) – Raveleijn (exciting show with horses in open-air theatre next to Dream Flight)

Efteling has two large self-service restaurants (Het Witte Paard and Panorama), a popular pancake restaurant (Polles Keuken), a medieval restaurant with a potluck dinner (Het Wapen van Raveleijn) and countless kiosks and stalls with a varied selection of food. Here you will find the perfect place to satisfy your hunger with fries with mayonnaise, poffertjes (typically Dutch small pancakes) with powdered sugar, noodles, fresh pastas and freshly topped pizzas or a tasty hamburger. 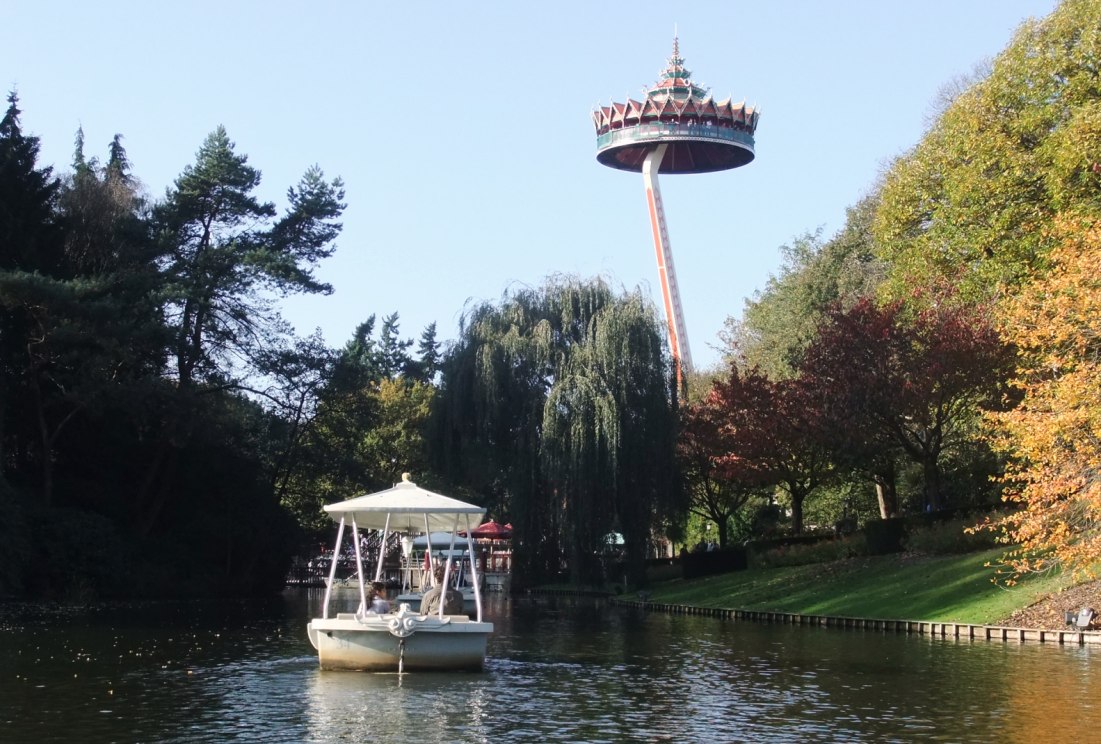 Efteldingen (largest souvenir shop, at the park entrance) – In den Oude Marskramer (many fairytale articles, at the entrance to the Fairytale Forest) – Jokies Wereld (colourful shop with presents for toddlers and preschoolers, next to Carnaval Festival) – De Bazaar (Eastern trinkets, at Fata Morgana) – Dromerijen (walk-through shop with a lot of elves, at the exit of Dream Flight) 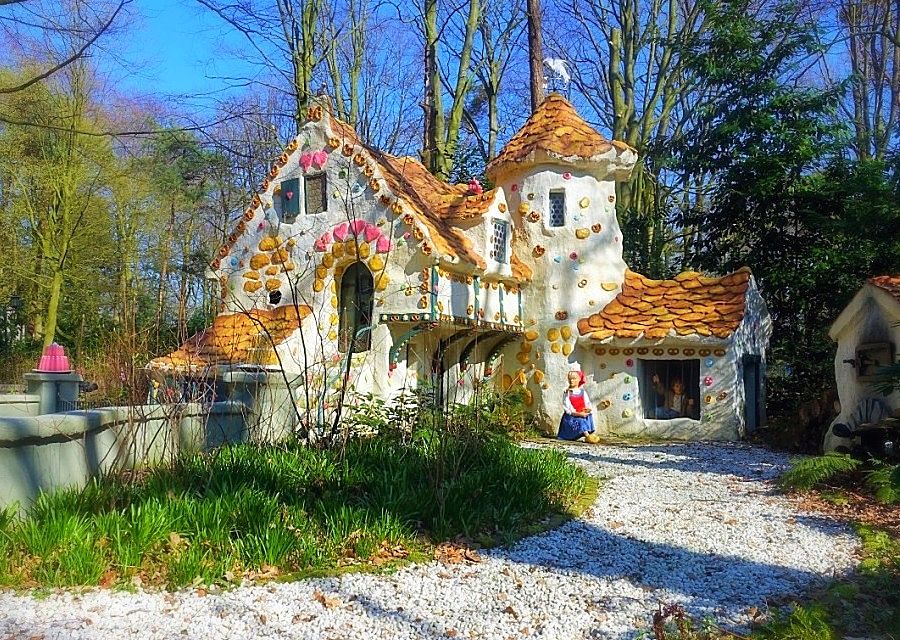 Number of visitors: around 5 million per year.

Efteling is open every day of the year, generally from 10 a.m. to 6 p.m. (in winter from 11 a.m.) • In July and August and in Dutch school holidays open until 8 p.m. On Fridays and Saturdays in July and August until 10 p.m. 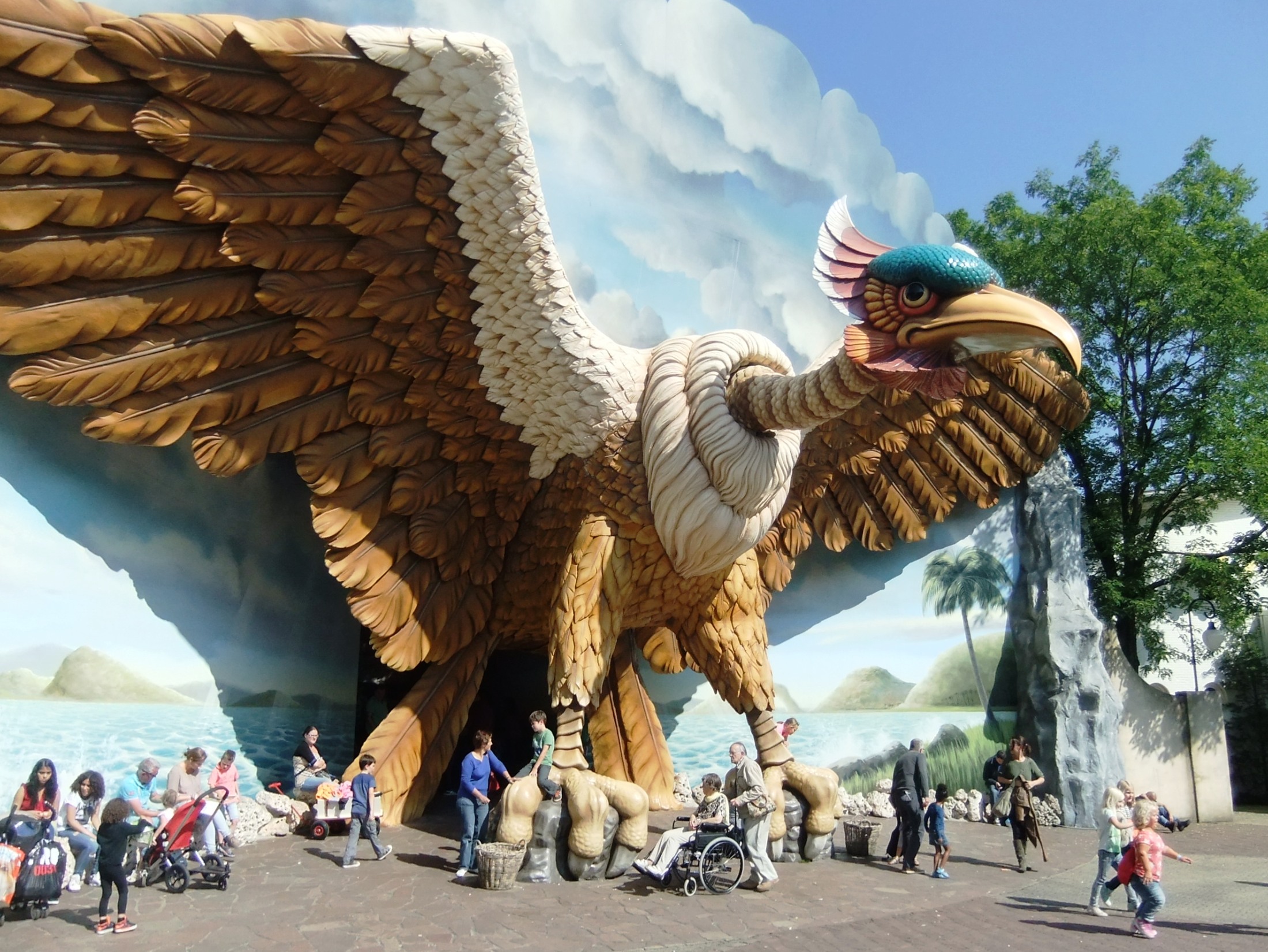 Efteling in Kaatsheuvel is located on motorway N261, halfway between the cities Waalwijk and Tilburg, in the south of The Netherlands. The amusement park is easy to reach by car or public transport; from Amsterdam in about an hour and a half. 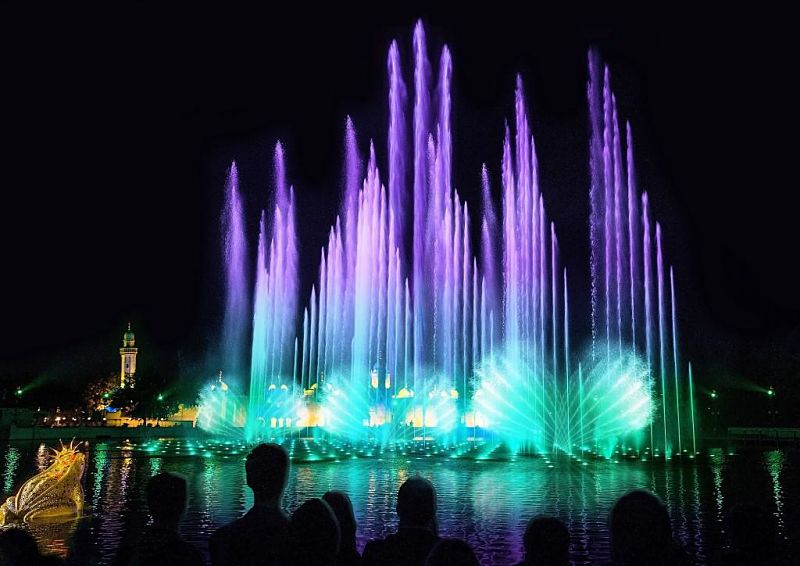 There are four playgrounds for children: Kinder Vreugd is an Old Dutch playground in the style of Anton Pieck and is located between Volk van Laaf and Villa Volta. Kleuterhof is a colourful playground next to restaurant Panorama (near Vogel Rok). Opposite Vogel Rok is the Archipel water playground and next to roller coaster Python is interactive playground Nest.

Take a free park map at the entrance, with information about entertainment, souvenirs and food and drinks.

There are thirty scenes in the Sprookjesbos. If you don’t want to miss a single fairytale, go through the main entrance in Marerijk (between Carousel Palace and souvenir shop In den Oude Marskramer) and follow the red vowel path.

Have souvenirs you buy in the park brought to the exit and pick them up at the end of the day. 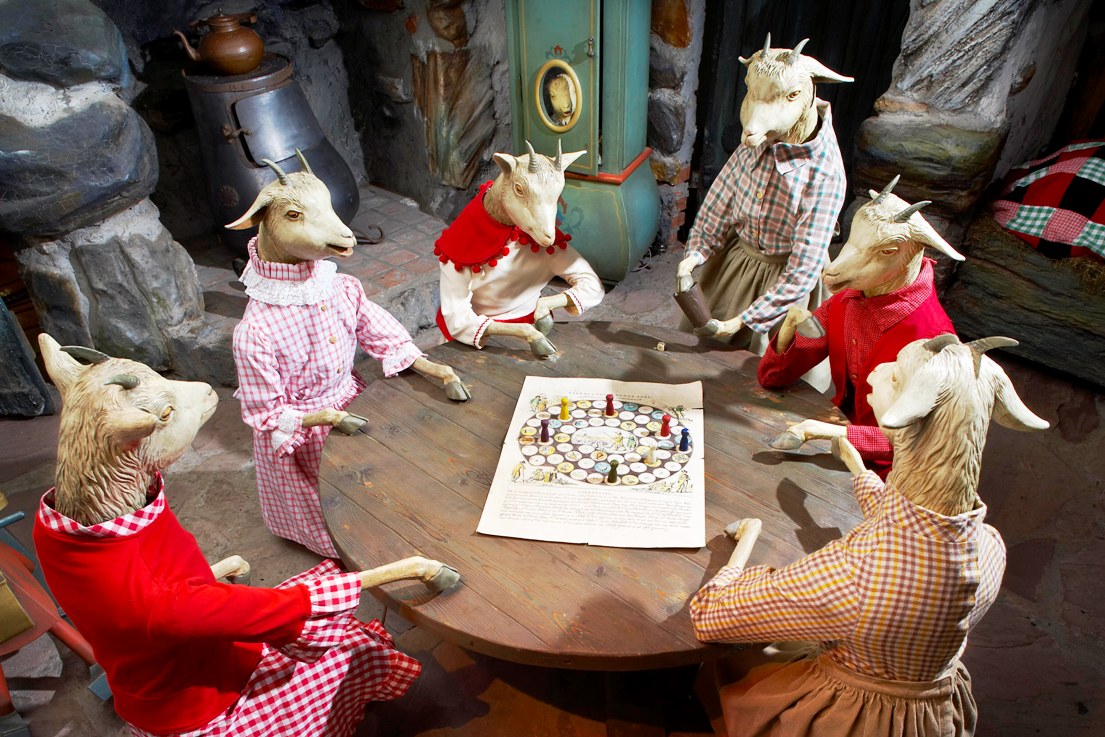 With Baby Switch, parents with a baby can enjoy an attraction separately without having to stand in line twice. One parent joins the queue of an attraction and the other parent reports with the baby at the exit of this attraction. When one parent has visited the attraction, he or she takes over the small one from his or her partner. The attractions with Baby Switch are indicated on the park map with a special symbol.

The best place to see the fountain show Aquanura is on the deck along the railway line.

Efteling has a handy app for the smartphone that indicates exactly where you are in the park. The app shows show and waiting times, where stores and eateries are and the nearest toilets. The Efteling-app can be downloaded for free from the App Store or Google Play Store. 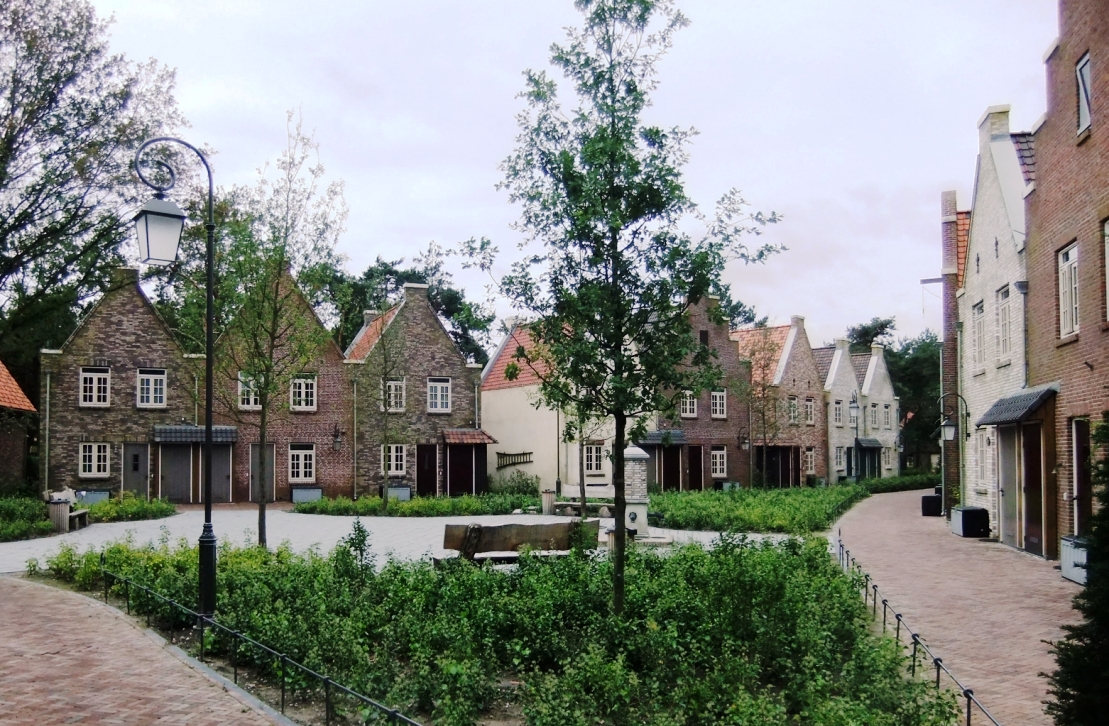 Efteling Hotel has 102 comfort rooms that are fully equipped. In addition, the hotel has 21 fairytale-style suites around themes as Cinderella, the Laven, the Steam Carousel, Circus, Sleeping Beauty, Hans Christian Andersen, park mascot Pardoes and De Vliegende Hollander. You can relax with a drink or a snack in bar De Gelagkamer or in restaurant De Hoffelijke Heraut.

Holiday park Bosrijk has Boshuysen, Dorpshuysen and apartments, located in a green oasis of tranquillity, yet close to the amusement park. In holiday park Loonsche Land guests stay above, on or even below ground. 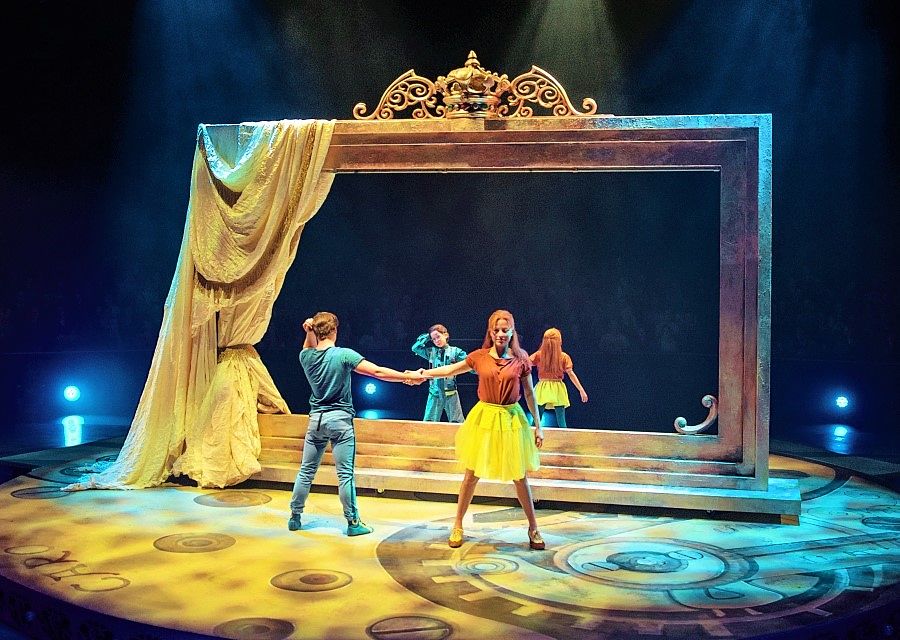 Theater performance CARO in Efteling Theater is a visual spectacle for the whole family with humour, music, acrobatics and beautiful scenery.